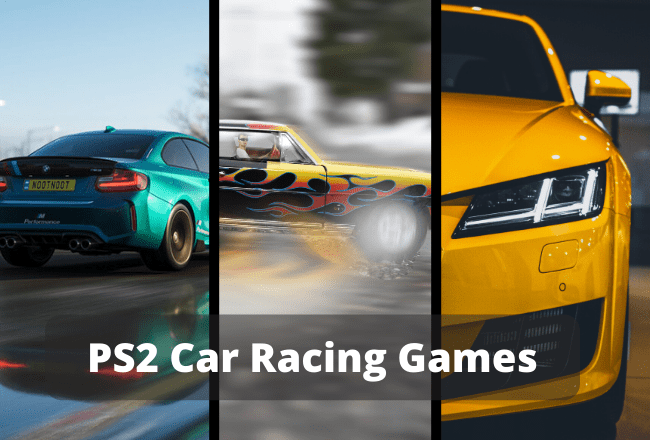 Are you in search of the top PS2 car racing games? Or someone just gifted you a PS2 and now you want to know about the best racing games.

Here, I have compiled a list of five best PS2 games in racing genre. Let’s get started from bottom to top (the ratings will be according to the official gaming platforms).

As the name suggests — this game is the 4th edition of Gran Turismo series. This games gets 89% favor at Metacritic platform. This game has nice graphics and additional avenue which makes it worth a try.

What is so special about Gran Turismo 4?

This game has a huge variety of cars — around 700 cars obtained from eighty manufacturers. However – later editions of this racing car game has more than thousand cars. This is the reason we have ranked it on the fifth number.

Everyone knows about the “Cars” car racing movies — but they were later adopted as a racing game. This PS2 racing game gets 7/10 rating on Steam. Fans of Cars movie love to play this game to get a live experience. This game is perfect for your kids — and there is no harm to play it if you are adult but a fan of its characters.

Which is the most famous character of the game?

Lightening McQueen stays on the top of the best racing cars and if you choose to play with her — better make her win.

Every kid must have played this game in their childhood. It was like the GTA of racing games — with a whopping 4.5/5 ratings on CNET download.

What is so special about NFS?

NFS has astonishing arcades, beautiful cars and cool graphics. This game was my favorite game in childhood — reminds me of good old days with big PCs.

If only you were a professional gamer — you would have known what is coming next. This game with a rating of 9.4/10 on IGN.com — whereas, 93% users liked this game on Metacritic.

Why did you place on the second position?

Anyone who is a pro gamer understands the importance of awesome aesthetic, sound track and music along with its other features. This game sits right on the standard of a pro gamer because of its ORIGINAL sound track.

Is burnout 3 an interesting game?

Burnout 3 is more interesting than one can think — it has various different types of racing contests. The cars unlocked excites the gamer to play and earn to get the favorite as soon as they could.

Remember when I said about the other editions of Gran Turismo having more cars? This game has more fans. With 95% likable game rating from Metacritic and 9.8/10 on IGN.com — this game stands on the top of all others.

Why is Gran Turismo 3 the best game of the list?

The rating suggests it is one of the best racing games for PS2 with beautiful graphics, cool soundtrack, and amazing gameplay.