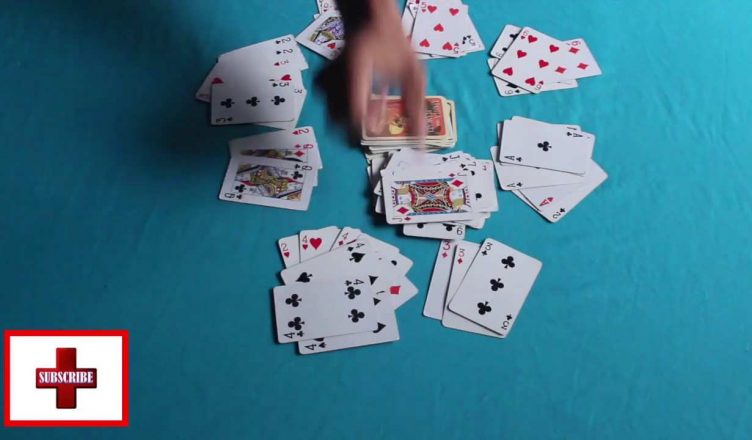 It is possible to play Shanghai Rummy with multiple decks of 54 standard playing cards, including the Jokers, at the same time. For a game with up to four players, two decks of cards are required. Three decks are required for a group of five or six players. Aces are either high (above a King) or low (below a King) (below 2). Each game consists of ten hands, with a different set of rules for each hand. One person is designated as the dealer for the first hand, and then the person to the dealer’s left is designated as the dealer for the following hand, and so forth. For each of the ten rounds, each player is dealt a hand of eleven cards. This is referred to as the deck, and the rest of the cards are then placed face down in the middle of the table between the players. One card is selected from the top of the deck and placed face-up next to the other two cards in the deck. This card is referred to as the upcard, and it serves as the starting point for the discard pile.

At the start of each player’s turn, they are presented with a choice. They have the option of either picking up one new card from the top of the deck or taking the upcard that has been dealt with them. As a result, any other players who are present have the opportunity to obtain the upcard.) As soon as a player draws his or her card, whether from the deck or from the upcard, he or she must choose one of the cards in his or her hand to discard, and then he or she must place that card face up on the discard pile. That card then becomes the new upcard, which can be taken by the next player in turn or purchased by other players in turn after that. Obtaining a card that is not yours requires a player to say, “BUY,” before the next player draws their card, or else the card is deemed “dead.” Once a player discards a card, the card underneath that card is no longer considered a “live” card because it is no longer part of the game’s progression. These cards are not permitted to be taken by the players.

Play For The Player Who Has Gone Down

In the event that a player is “down” (that is, has already melded), he or she still takes his or her turn in turn with the other players, and he or she must still draw and discard cards. A player who is down, on the other hand, is unable to purchase a card, nor can he prevent another player from purchasing the top card in the discard pile when it is his turn. When a player is down, he or she can play his or her cards on melds that have been completed by himself or by other players. For example, if a player has laid down a set of eights and then draws another eight on a subsequent turn, he can use this eight to complete his set of eights. He accomplishes this by grouping the 8 with the other eight. If he has a card that he would like to play on a run, he must be careful not to disrupt the order of the run by playing it before the run is complete. Consider the following scenario: A run of 5 is formed by the cards 4-5-6-7-8 of clubs. The player can choose to play either the 3 of clubs or the 9. However, if there is a joker on the board, he cannot replace it with the appropriate card; however, if the run contains a black 2 (which serves as a wild card), he may choose to replace it with the appropriate number and move the 2 either up or down.

A “buy” occurs when an out-of-turn player takes the upcard, draws two additional cards from the stock, and is unable to play the cards immediately because he must wait for his turn to come around. If there are multiple players who want it, the player who is closest to the dealer’s left has priority. There is a limit to the number of purchases that can be made. During the first eight rounds, each player is only permitted to make three buys per hand. During rounds 9 and 10, each player is permitted to make a total of four purchases per hand.

The goal of each hand is to come up with the optimal combination of cards that will allow you to meld, or “layout,” your cards. For each hand, the combination is different, and the combinations become increasingly difficult with each subsequent hand. For each hand, the combinations are either sets or runs (seq), or a combination of the two types of combinations. A set is a collection of a specific number of cards of the same rank, with the suit of the cards being completely irrelevant. A “set of three” is a group of three cards that are all eights, and the eights can be of different suits or the same suit. Generally speaking, a run is a grouping of a specific number of cards from the same suit that have consecutive ranks in their suit. The 4, 5, 6, and 7 of clubs are an example of a “run of 4” in chess. “1 set of 3 and 1 run of 4” is a combination for hand #2, which is an example of a hand combination. This means that a player must have both a set of three cards and a run of four cards in his hand in order to be able to meld his cards together. A player can only meld when it is his or her turn to do so. To begin, he must draw one card from the deck, and when he has the correct sequence of cards, he can meld them together or “go down.” He accomplishes this by arranging his meld cards face up on the table in the proper sequence for the game. Following the melding process, a player can begin playing on the melds of other players. When he is finished, he must discard his work. A playable card may not be discarded by the player. If a player does not have a discard, he or she must purchase two cards from the deck, and he or she does not have to discard when he or she purchases the cards. In order for anyone to benefit, the player must play his or her final card.

The game continues until the final hand, at which point one of the players “goes out,” which means he is no longer able to play the last card in his or her hand. Despite the fact that players may discard cards at any time during the game, in order to win, they must be able to lay down all of their cards without discarding them. In order to win, a player must be able to draw a card on their turn and then exit the game without discarding any cards. After the hand is over, the winner receives zero points, and the remaining players count their cards in order to determine their final score for the hand. After all seven hands have been played, the player with the lowest score is declared the winner.

Jokers are wild cards that can be used in place of any other card in the deck. In either a set or a run, a player is not permitted to have more jokers than face cards in his or her hand. This can be illustrated by the fact that to complete a set, one must have three or more cards of the same rank (8/8/8), as an example. However, if a player has a joker or a 2, he or she could substitute for an 8 (8/8/joker). However, a player may not lay more jokers than face cards (8/joker/joker) in a single round. He may, however, lay the same number of jokers as he does of face cards (8/8/joker/joker/joker). The same holds true for running. Anyone can replace a joker with the appropriate card in a run or set if a player has laid down and has a joker in the run or set. Any joker replaced by a player who has not yet laid down his or her meld must be laid down in that turn; however, if the player has already laid down his or her meld, the player may take the joker and use it however he or she chooses at any time.