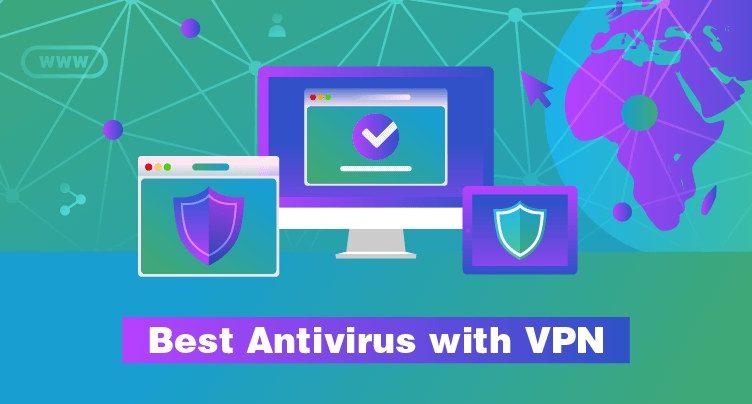 With the aid of this tutorial, you will be able to determine which antivirus suites are the most effective and which ones are the most cost-effective. So continue reading to find out everything you need to know.

The Best Antivirus Software That Includes A Vpn

Norton 360 is the best antivirus and VPN combination available.

Vipre Antivirus – The most feature-rich antivirus and VPN available today

Is It Necessary To Use An Antivirus Programme In Conjunction With A Vpn?

In order to safeguard your devices and your privacy, you will need to use both a VPN and antivirus software at the same time. This is due to the fact that an antivirus program keeps your device secure from software dangers, whereas a VPN protects your data through encryption and conceals your internet activity.

A virtual private network (VPN) protects your online identity and activity from third parties by diverting your data through a VPN server and, in the process, disguising your real IP address (as well as the websites you’re visiting). The ability to reclaim your privacy from your ISP, the government, hackers, and others is provided by this.

Even while virtual private networks (VPNs) are extremely vital for keeping you safe online, they do not provide the same purpose as antivirus software. An antivirus program will protect your device by preventing malware from being able to take control of your system, identifying risks, analyzing them, and then preventing any possible dangers from taking hold of your device. Although a VPN is required, your computer is still exposed to viruses if it does not have effective antivirus software installed.

Our Comprehensive Guide To The Best Antivirus Software That Includes A Vpn.

The majority of well-known antivirus companies include a VPN in one or more of their price plans, although these services are typically limited when compared to independent VPN services. Some antivirus vendors, on the other hand, give crucial VPN services to their customers. Here is a selection of some of our favorites:

Read More: How To Make Digital Signature For Excel

Norton 360 Is The Best Antivirus And Vpn Combination Available.

Norton Antivirus, one of the most established and widely used antivirus products on the market, has been safeguarding computers from cyber threats for more than three decades. In addition, it continues to live up to its reputation for providing strong antivirus protection, since it now has one of the highest detection rates for malware in the industry, according to the company. Some of its offerings also contain a virtual private network (VPN). And even better, when it comes to features, Norton antivirus software is probably superior to any other antivirus program we’ve tested so far. It includes web threat prevention, a password manager, and a 10 GB cloud backup for your computer. It also distinguishes itself from the competition with its 100 percent Virus Protection Promise, which guarantees that if Norton is unable to eradicate a danger, you will receive a refund. It also comes with an amazing VPN that delivers limitless data and can unblock US Netflix, in addition to being one of the top antivirus security suites available on the market. This feature is included in Norton’s Standard plan, which costs $29.99 for the first year. Furthermore, unlike the majority of antivirus VPNs, Norton’s VPN is not a white-label product, which means it was developed by the firm itself. It is also incorporated into the application. During our testing, we encountered no IP leaks at all, which was to be expected from such a well-regarded product.

On the downside, Norton 360’s VPN does not include a kill switch and does not allow P2P transmission, which means it is not appropriate for torrenting purposes.

If you enjoy watching videos on the internet, TotalAV’s VPN is a fantastic alternative. I was able to effectively unblock Netflix in the United States, the United Kingdom, Canada, and Germany, as well as Disney+, Hulu, and HBO Max. TotalAV is the only VPN on this list that is capable of unblocking all of the platforms listed above. Because every stream was buffered for less than 5 seconds and then promptly streamed in full HD, the overall experience was excellent.

You may connect to more than 60 different locations, which is the most of any VPN on this list. Considering that most antiviral VPNs have rather tiny server networks, it’s refreshing to discover one that gives a diverse range of countries to choose from. The increased server selection provided by TotalAV provides you with more streaming alternatives, faster local speeds and more dependable connectivity because each server has fewer users putting additional strain on it. I was really pleased with the average speed of 107Mbps that I achieved while testing. With these speeds, you’ll be able to easily stream in up to 4K quality, surf without interruption, and download enormous files in record time, among other things. This average was comprised of speeds ranging from a low of 28Mbps in Australia (which is more than 13,500 kilometres away!) to a maximum of 225Mbps in Germany. Both of these are sufficient for the vast majority of applications. I’m also pleased with the antivirus software provided by TotalAV. It boasts a 100 percent detection rate, a firewall, and anti-ransomware and anti-phishing security, among other features. Overall, TotalAV has a user-friendly design that makes using the software a pleasurable experience. The TotalAV antivirus software is difficult to beat if you’re on a tight budget but still consider yourself a power user who doesn’t want to sacrifice features. Even the most basic package includes access to the VPN. With TotalAV’s 30-day money-back guarantee, you can test out the excellent streaming capabilities for yourself for no cost for the first 30 days. In order to prove this, I signed up for an annual plan and ran tests for a few days before asking for a refund through a support ticket. Despite the fact that it took nearly two days to receive a response, I was approved and received my money returned into my account just two days later.

Speeds For Torrenting And Streaming Are Exceptional With Mcafee Vpn.

McAfee’s VPN is extremely fast, with average server speeds of 125Mbps on a regular basis. I put it through its paces by connecting to servers in Germany, the United Kingdom, the United States, and Australia. With the exception of Australia, I was able to achieve download rates of at least 130Mbps in all cases. This is particularly astounding when you consider the number of premium VPNs I’ve tested that are unable to reliably deliver speeds of 100Mbps. You’ll get different results depending on where you live, but my tests revealed consistently fast download speeds.

You can utilize these speeds to stream in high definition and ultra-high definition. In my tests, I was able to unblock Netflix in the United States, the United Kingdom, and Germany, but I was unable to access Disney+ and HBO Max. Torrenting, on the other hand, proved to be more successful. I connected to a German server and downloaded a 34GB torrent file at an average rate of 115Mbps in just 43 minutes! This is an incredible speed! Obviously, my true IP address was concealed so that I could torrent without fear of being tracked down by the authorities.

Its antivirus software, which is part of a comprehensive offering of powerful real-time ransomware, spyware, and malware protection, also offers incredibly high detection rates, with a 100% success rate. It doesn’t have as many features as other security suites, such as Norton 360, but it is still a well-rounded package.

McAfee’s most significant flaw is its convoluted VPN interface, which is difficult to maneuver through. There’s also no kill switch, and there’s no way to change between different encryption schemes. If you require complete confidence in the security of your connection, you may be better served by using a different VPN service.

With McAfee’s 30-day money-back guarantee, you can try the software for free for 30 days. I joined up for a month on my own and then submitted a request to be notified if I was selected. McAfee solely conducts refunds over the phone, as opposed to competing with antivirus firms that offer live chat and email help as well. It took less than 10 minutes for me to receive a call, however. It was only after I verified my refund that it was processed by the person — and I had my money back within seven business days.

Is There A Free Antivirus Programme That Also Includes A Vpn?

Despite the fact that most antivirus providers who provide a VPN will include it in their more expensive packages, some products come with a free VPN built-in.

For example, Avira’s free antivirus subscription includes access to the company’s VPN service. However, it is unquestionably restricted. For starters, it has a data cap of 500 MB per month, which is quite reasonable. This means that you won’t be able to use it for anything other than simple web browsing. As a result, it does not provide you with a choice of servers to connect to, making it ineffective for unblocking most region-restricted content. When it comes to cybersecurity technologies, as with other things, you get what you pay for. Furthermore, free VPNs are typically so limited that you’ll be better off spending the money on a paid VPN that has powerful security features and limitless data.