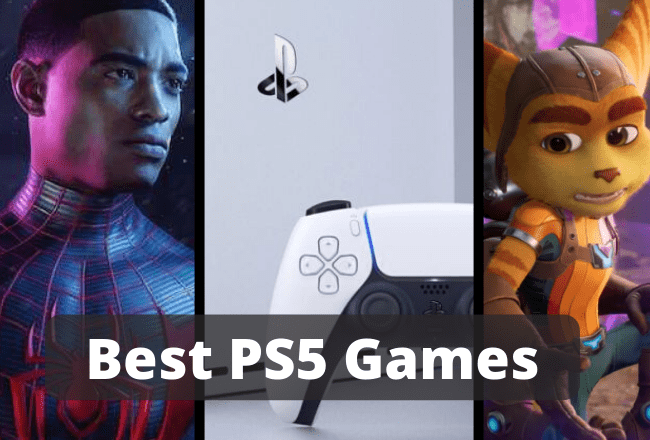 Are you excited for the Latest PS5?

Yeah? Me too. Nah? Okay, let me tell you why PlayStation 5 will be the next big gaming thing.

PS5 will have some of the best games ever released, and some new editions of the most famous games.

What are the Topmost Games of PlayStation 5?

Well, we have compiled a list of some PS5 games that fans are waiting for.

But before that, let me tell you the other features of PS5, which makes this gaming console a big deal.

If by any chance, you have emerged out of a cave, let me tell you how Sony PlayStation changed the world of video games.

When Sony PlayStation was launched, it had received all the appreciation in the world. And now, with this fast-changing world where every other day a new technology is introduced – it becomes tougher to keep the pace up and make your mark.

Sony PlayStation has yet managed to launch 4 editions in total and is all set to launch the fifth one this year (2020). Yeah! Something is exciting about this awful year. This fifth edition might not be the fastest gaming console of the decade but it has cool features and fairly large memory i.e. RAM (to save all the games in the world in your little PlayStation).

Why PS5 is worth buying?

Game lovers always look for the best of all, and PS5 will be a perfect fit for them. There will be games that will give those gamers an experience of exploring new levels, accomplishing new tasks, and amazing HD graphics. All new and advanced versions of your favorite game at your place. What’s better than that?

What are the unique features of PS5?

Game lovers always want the updated versions at first, but certain technical changes make PS5 stand out of the crowd. Apart from new games, Sony PlayStation 5 has other exciting features to offer – let’s have a look at them.

For instance, PS5 will be supporting up to 8K screen resolutions and 120Hz – that will make virtual games feel like a reality. Also, the look of this PlayStation 5 makes it the best console of this generation and opens the door to the new possibilities – because it’s a Blu-ray player just a beginning.

This gaming console has unique features like an amazingly fast SSD and ray-tracing. All this so that you can enjoy super super-fast and uninterrupted games.

But that’s not all, the gaming console is beautiful and has aesthetically pleasant looks. The design gives modern vibes and the choice of monochromatic colors makes it look like the modern god of gaming consoles.

And if you ever felt lost while playing a game, PS5’s latest voice assistant feature will keep updating you about the current reports of each level. That’s exciting!

Okay, all this is cool but can I get my PS4 games on PS5?

Yes! With its backward-compatible technology, you can get all your favorite PS4 games on your new PS5 and play them on your super-fast gaming console.

There is not a single official announcement about the PS5’s price but we have made some researches. You might have to have some $500 extra if you want to get this gaming console in your hands. It is all for the quality of experience and Sony would surely give you the value of your money.

Now that you have made your mind to get your new PlayStation 5, here are some suggestions of the best games that are officially a part of PS5. All these games mentioned here are extremely cool and modern, and they will be worth playing on your new PS5 gaming console. Most of these games are action games with a solid screenplay, plot, and latest editions of their respective gaming series.

Top 10 games worth playing on PS5:

There are several games but we have handpicked some of the best and most awaited game of the year in this list below.

Okay, this had to be on the top of this list! The game inspired by Vikings is one of the most played and adored games in the world. This time, Assassin’s Creed Valhalla will bounce back with some more exciting levels and ever more exciting plot.

If you have played the games of this series before – you might have already made your mind to buy the game.

But if you are new, this game series has one of the strongest plots, coolest graphics, and beautiful voices/music. I loved the Vikings voice in the trailer of Assassin’s Creed Valhalla. This is a game you surely would want to miss in your life.

This is a free action-adventure game that is available at all major platforms. It will also be available on the PS5 gaming console, all for its lovers. Fornite has a huge fan base because of its epic battle sequence; however, it is not very ideal for sensitive people and is rated T (teenagers) because of violent battles. Playing this game on the latest PS5 would be the most visually pleasing experience to ever have – all hail to its 8K screen resolution technology.

Fortnite has yet managed to gain 8/10 ratings on Digital Trends Downloads.

Why is Fortnite even famous?

If this game is new for you, various features made it famous amongst the gamers. Perhaps, one of them is its addictiveness – the game plot and characters are interesting enough to grasp its players’ attention. Furthermore, its graphic and sound system is bang on!

If you are a lover of intense action gameplay, this is a fit choice for you. You can also try this game online. Fortnite Battle Royale is free everywhere, but some character moves can be brought (in case, you want your favorite character to dab).

Who is the developer of this game?

This game has been developed by the Counterplay games, which has never disappointed its users. We can expect this game to be a big hit.

The graphics and intense sound/music quality are mesmerizing. Let’s see how the levels and plots come out.

Watch Dogs is well-known for its powerful characters – be it Marcus or Aiden. This is an action-adventure with an interesting plot and great characters. This is a whole story in itself, and those who have been a part of this story from the start would surely not miss this one as well.

What is so great about this Watch Dogs series?

WatchDog series has the leading protagonist with the name of Aiden Pearce – the leading character plays a pivotal role in the success of this game. This has been called the modern version of Assassin Creed because of its splendid story-telling ability.

If you are a crazy fan of football and loved every league whole-heartedly, then it might be needless to inform you about the arrival of this iconic game. Football games never cease to disappoint, and we expect the same from the National Football League’s football video game. With the help of EA Sports, Madden NFL is all set to release yet another edition of the series.

Will Madden NFL 21 allow you to build a team?

Although the name and logos of the teams are unalterable, this game allows oneself to create their dream team for the league.

Now, you can play the latest version of the football game on your PS5 and enjoy the graphics and music – just like you enjoyed the live match.

The Lord of the Rings: Gollum

PS5 ensures its users that it offers full entertainment. The Lord of the Rings is a vast franchise along with a large fan base. The game is renowned for its awesome plot twists and characters. This is another edition of its preceding game and we can expect it to a great one.

Why should I play Lord of the Rings: Gollum?

If you are looking for an interesting game in the action-adventure genre – this is a beautiful example. The graphics and music are great, and the characteristics of the leading protagonists are the epitome of perfection. This would be perfect in all means and their fan base has great expectations with this game and its climax.

Enough of all these action-adventure games – now it’s time to race some cars. Dirt 5, as the name suggests, is a car racing game. You can enjoy this gameplay with your cousins, friends, or partners as it is a multi-player adventure. The cars of this game have a separate fan base, and this time Dirt 5 is back with some very cool arcades.

What makes this car racing game stand out?

The basic theme of this game is a car racing in extremely dirty and muddy arcades. Graphics and sound quality is a plus point. So, if you are a fan of messy car racing games then you can give it a try.

Those who are familiar with the Oddworld series are aware of its characters and plot. But those who are not aware – this is a kickass game and has awesome graphics and sound quality. It is all set to get launched in 2020, and the characters might have to save the victims to pass a level.

Why is this game on PS5?

After its much-deserved success on other platforms, the producers are keen to launch this edition. We can expect some great plot twists and some cool upgrades in music and graphic design.

Have you ever dreamt of building your own freaking game? Your dream has come true! It allows you to create your own game. This mind-blowing game has everything a gamer would need to create a perfect setup.

What makes Dreams one of the most awaited games of PS5?

Most people wish to develop a game of their own choice, with a character having the best heroic characteristic and an interesting storyline, but the lack of resources prevents them to do so. Now, they have all the tools and gadgets that are required to create the game, and they can build it from scratch to a fully-developed game.

This is a free-world adventure game with epic quests. It has phenomenal graphic quality, but the sound quality stays on the top. It consists of challenging battles, dreadful dungeons, and powerful heroes.

Why should I play Gods and Monsters?

This game has very cool characters, but the supervillain Typhon is the best attraction of this game. This is all set to get launched in 2020.

PS5 has some of the best editions of games, but the other features are also worth the money. Sony gaming consoles have always set the bars higher than its competitors – and which is why it has the most loyal customers. PlayStation 5 has already got all the hype in the world hand every big gaming franchise is all set to release their new editions with them.

All these games aforementioned are highly awaited, and some of them have a huge fan base already. Let us see if the Sony PlayStation 5 can still hold the flag of success for Sony or not – and we can expect terrific results from this gaming console. We wish you a happy new gaming console year!